What a last few weeks it has been. I’m sure you’ve heard about the thunderstorms and tornado’s that have swept through the south these last few weeks. I’d like to say that Little Rock was spared as it usually is, but regretfully, I can’t. The first wave of storms dropped a tornado onto LIttle Rock AFB which is about 20 minutes north of downtown Little Rock, about a 30 min northeast of my house. Although it was a smaller tornado, it hopped it’s way through the base, doing substantial damage to some of the base houses, toppling numerous large trees, flipping cars in the commissary parking lot and finally wrecking some hangers and doing damage to 3 aircraft. As the base was recovering from the tornadoes, those from my squadron were all still preparing to deploy. Many of us wanted to help clean up, but leadership did not permit us to do so, giving priority to predeployment activities. Rumor had it that all the crews taking planes over to the desert would be delayed 24 hrs, but what ended up happening was more logical. Instead of eight planes over 3 days, it was changed to two days, with four on the first day, four on the second. My crew was slated to leave on the last day, Friday, from the start, so nothing really changed for us. 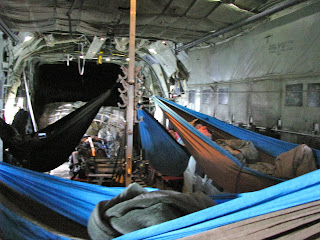 Departing Little Rock was actually very uneventful. Because of my Aircraft Commander’s (AC) status as being probably the most senior C-130 pilot in the Air Force, we were on the last plane to leave Little Rock. The last plane is usually the most broke plane, this occurs because as previous planes attempt to depart and break, that plane gets rolled to the next crew, with the previous crew taking the more capable aircraft. Luckily for us, that didn’t happen and we left on time. 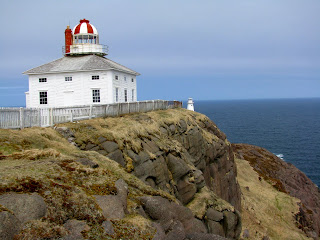 On our trip to St. Johns, I was riding in the back. We have two crews on our plane so we split the duties. My buddy wanted the first leg, so I get the next leg. I was sleeping or reading 90% of the way up from Little Rock to St. Johns, Newfoundland, Canada. I tried to wake up in time to see New York City as we passed by, but missed it. However I did see most of Long Island. It was kind of sobering when we passed Cape Cod because that was the last of home that I will see for a few months. I felt especially sad because even from 21000 feet I could tell there was a swell on Long Island and Nantucket. The swell was evident when you could see the large rip tides pulling all the deep brown sand out to sea. I believe it was off shore winds because the storm that ripped through the south with tornados had just blew threw this area of the country.

A couple hours later we touched down in St John’s. Winter definitely lasts longer in this outpost of the Canadian Province of Newfoundland. It has rarely been greater than 35 degrees F since we’ve been here. We tried to take off the following night, but were denied before we even left the hotel because there was a fog over the airport. We have rules about the minimum cloud ceiling and visibility limits, and it was well below and getting worse than the minimums allow. Along with us, were four other crews that canceled as well. The next night we canceled again, not because of weather but because of a fuel leak which requires at least a day’s maintenance after the parts get here. The parts were being delivered to us by a C-130J from Little Rock also on it’s way to deployment. Currently, we are scheduled to leave tomorrow morning. We’ll see if that sticks.

Flyers from Little Rock love stopping here in St Johns. It really is a nice little fishing and shipping town. St Johns has a terrific history, being the furthest east city in the North American continent, which dates all the way back to the 1700’s. At one point, the US had a base here as a base for submarines and such during WW2, but prior to the war, it received the first oceanic wireless transmission from Ireland on the appropriately named Signal Hill. We made our way up Signal Hill as well as found the easternmost point on the continent at Cape Spear.

Posted by Chris Huddleston at 5:11 PM