God Save the Crew

Now on our fifth day in England, this vacation to Mildenhall has been a lot different compared to St Johns. Each day is groundhog day. Each day, we wake up, eat, check out of the hotel, go out to the plane, sit in base ops or hang out at the plane for about 7 hours, decide we are not going to take off, check back into the hotel, eat, then hang out at the bar until midnight, rinse, recycle, reuse. Yesterday (Thursday) was the most obscure. First we actually cranked the engines, then after taxiing by the plane spotters, took off to only turn around no more than 10 minutes out because the wing anti-ice didn’t work as we were about to go into rain clouds right around the freezing temperature. 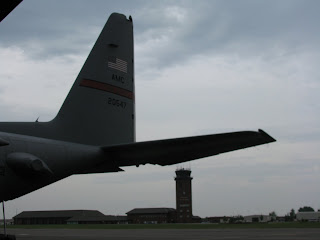 On a side note, it’s a funny thing about Europeans, particularly the Brits, they love taking photos and keeping track of planes and their tail numbers as they pass through Mildenhall. Off the approach end of the runway, there was at least a dozen people with telephoto lenses and I imagine radios, tracking and documenting our every move. These folks are not spies they are just aviation enthusiasts. After talking with my buddy from pilot training who is stationed here, I learned that these plane spotters have a special agreement with the base to be allowed to loiter in close proximity to the runway. In fact, they actually report to the base when anybody new or suspicious shows up to photograph the aircraft.

Also, last night I was able to relax with my buddy and his wife. It was a great change of pace from the base’s bar. They live in a quaint little condo in a small town off base. In the 15 minutes it took to drive to their home, I learned and saw more of England than I had the entire 3 day’s combined. Perhaps most obvious due to the amount of small cars, the roads are even smaller. American SUV’s and trucks would not fit on this tiny roads, and I love it. The roads were also much more curvy and utilized roundabouts instead of stop signs and stop lights. Much more efficient in my opinion.

Eventually, the next day we made it out of Mildenhall, our second try in as many days. The weather treated us nice in England, only lightly raining one evening, which made for pleasant temps when hanging out at the plane while it was being fixed. Our trip through the sky’s across Europe took over very similar routes our ancestors did in World War II. My AC was constantly calling out drop zones, airports, and battlefields as we made our way across Holland, Belgium, and Germany. In fact we flew almost directly over where the 101st Airborne Division was dropped on D-Day, think of the film Band of Brothers. Even as we were flying over that area of Europe, you could see it was a very different culture, just by the way the cities were arranged. Lance, my AC, described it as though the farmers live in the towns and drive the tractors out to the fields, which is why there are ton’s of small towns sprinkled all over the countryside. Towns would literally be 1 or two miles away from each other but there was a definite separation between the two.

As we made our way to eastern Germany and eventually the eastern Europe, where our destination of Romania lies, it became more and more sparsely populated. However, flying into Romania, it was overcast below us and was impossible to see what it looked like. Being my first trip to a truly foreign country I was not enjoying the fact we were gassing and going like we were instructed (fragged) to do from our controlling agency, TACC. Because it has taken us so long to get this far, TACC and our desert squadron were becoming very anxious to get us there. The desert is like a magnet, the closer you get to it, the more they want you there, even if your plane is not a passable flying machine.
Posted by Chris Huddleston at 2:04 AM