Winging week and beyond 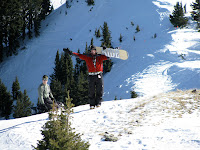 Everyday since about last Wednesday has been a blur. On Wednesday, I received my training RIP for Little Rock. This is a form that gets the ball rolling for any kind of training or PCS (permanent change of station). This is where the week got crazy.
A few friends and I had been planning a ski trip for this past weekend. Kind of as a reward to ourselves. Anyway, it was kind of painful trying to figure out who was coming and who wasn't. After the dust settled, there were 7 maybe 8 going. Well, then the fury of my training and PCS rip began. I am graduating from UPT this Friday, Jan 22. My RIP said I was supposed to in-process into Little Rock AFB on Monday, Jan 25 and begin my C-130 training on Tuesday, Jan 26. Well, that is an insanely small amount of time to pack up my things and move to Little Rock. So, I spent that day and the next trying to get something changed while preparing for the possibility of moving to Little Rock in a week, let alone maybe not going on this long awaited ski trip. It was looking as though they were not going to change my dates and I was going to be spending this weekend in the Rock looking for a place to live. After much frustration and several phone calls by people more powerful than myself, my PCS to Little Rock changed to a TDY. This means that instead of moving to Little Rock right away, I will be going to Little Rock for training then coming back here to Vance to move after I finish. The only downside, is I still start class on Tuesday. This is a huge improvement on my situation though. Now, I can go to Little Rock, scope the place out, figure out who I want to live with and do it right, not in hurry.
Anyway, now that the fire was contained, I could concentrate on more important things, like this weekend's trip to Taos. Seven of us ended up leaving on Friday for the 7-8 hour drive to Taos. We were lucky enough to have a friend with a time share in Taos which was a great place to stay. The weekend up ended up being super fun. The conditions weren't the greatest, as it hadn't snowed since Christmas, but the company was awesome. I'm so bummed that I won't be hanging out with these clowns much anymore come next week.
The big highlight of this week though is the upcoming winging. For so long I have worked for this day, the day I officially become a pilot. Friday is our graduation, or winging, as those of us from Whiting like to call it. It should be a great weekend, because on Thursday we have tours and stuff around the base with our family, and Friday we get winged.
In other news, our military is rapidly deploying to Haiti to help with the disaster in that country. Pray for the country and our military members going down there to help out.
Until next time, Pray for SURF,
Chris
Posted by Chris Huddleston at 9:09 PM