Today, as horrible of a day as it was weather-wise, presented a very unique opportunity. Our squadron is unique that if you are not scheduled for any events for the day, ie flying, simulator, etc, you are to sit on JCOP. Basically, it is mandatory study hall from 800 to 1200. No big deal, just a bunch shenanigans occur during this time, which is exactly contrary to its purpose. But, after JCOP, when Stefan and I got home, our roommate Clay informed us that Gov. Sarah Palin is in town today and is speaking at the civic 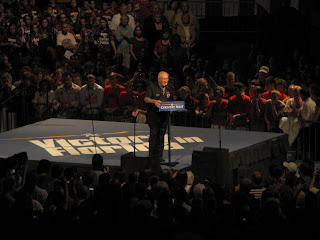 center. I was like, shoot, I don't feel like sitting around all day even if it is windy and rainy. So, in a random act, we all went down to the civic center and stood around in a line in the wind and rain for probably 45 min to an hour before we were able to get in. Not 20 minutes after we got in, Gov. Palin was called to the stage. How cool is this? What luck? Now the speech wasn't the most moving, but the atmosphere and the crowd were quite enthusiastic when she was called to the stage. Definitely a cool experience. Now it would be even more cool if she actually became the VP. Also, before she spoke, Col Bud Day spoke. I have tremendous respect for this man. He was in the Hanoi Hilton with Sen John McCain and also received the Medal of Honor. I believe he is the most decorated living veteran and also a resident of my new home, Pensacola, Florida.
Posted by Chris Huddleston at 9:44 PM

Hi Chris,
I don't know if I did this right - I thought I had already sent you comments but it was before I had a blogger id....anyway, enjoyed your blog - shades of what is to come for Stephen.....glad you saw Sarah Palin - She asked for prayer before the VP debate and I know that many were praying for her. She did great in that debate! She's a humble person with a heart to serve. Sounds like you! :-)
Have a great day!
in Him who give us purpose,
doree porter